While many of the world’s top chefs are male, we can certainly agree that most of the cooking done on a daily basis is left to women. This is not the case in the Basque region of Spain, where Basque gastronomic societies play a large part of their food culture. In Basque gastronomic societies, also known as ‘txokos’, men use cooking as a way to get together; eat, drink and discuss – often without women around. This culinary tradition allows men to experiment in the kitchen on their own terms.

If you are planning a trip to the Basque Country and would like to experience some of the local food traditions, don’t hesitate to get in touch with us! We can happily help you create a tour of the Basque country which includes exceptional food experiences.

Why do Basque gastronomic societies exist?

The very first Basque gastronomic societies were instigated by fishermen in the 1870s. The fishermen would catch their fish in the early morning, and then rather than return home; would use part of the day to cook a meal and get together freely, forgetting for a few hours their home duties. As the idea of Basque food societies gathered momentum, it passed around to various Basque cities and villages; where other members of society, such as craftsmen and intellectuals, also used Basque gastronomic societies as a forum for discussion and male camaraderie. This way these men could get together to cook, eat, drink and discuss ideas, without being annoyed or distracted by women; or told what to do! Over the past 150 years, over 1000 Basque txokos now exist, all over the region. In the kitchen of a Basque gastronomic society

How do Basque food societies operate?

The very first seeds of Basque txokos were all about men preparing food and having time away from their families to discuss personal issues, culture, political views, etc. Today Basque gastronomic societies have an assumed code of conduct where there is strong mutual respect amongst all the members. In this way, freedom of opinion and ability to discuss whatever it is you want, is on the table. It is understood that this is always done in a respectful and considerate way. Even though some of the subjects discussed are controversial, club members feel that the mixture of good food and conviviality loosens the tension in the air!

As the culture of cooking in the Basque Country is incredibly strong (hence why there are so may exceptional restaurants), younger men are always looking to join established Basque food societies. Despite the number of Basque gastronomic societies numbering over 1000, the waiting lists to enter are long. On average, a typical Basque txoko has 80 members, but some have a member count of over 100 men. Having so many members means that men cook in groups, on differently allocated days of the week: this way, every member gets to cook, and every member is able to enjoy being cooked for as well. Women can be invited as guests, they just aren’t allowed in the kitchen! The kitchens are designated to men; as this is their free space to discuss openly, without having to act differently; as they probably would around women.

In the Basque Country, women have always been highly regarded and respected, having opinions and a right to speak their own minds (different to many other places in the world!). This has meant that because society in the Basque country has been relatively equal, men decided to form their own exclusive places to discuss what they wished to; away from the women in their lives.

Though women are not allowed in the kitchen of Basque food societies, most members acknowledge that they have been inspired to cook, buy food and serve it from their mothers; so women still have a place in contributing to these gastronomic societies. 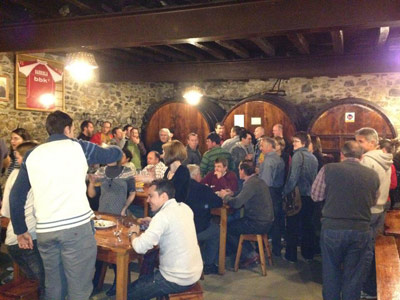 An evening at a Basque txoko – women have been invited!

Many men insist that because men and women are different and act differently, men can really relax and ‘be themselves’ in the company of a male-only kitchen. In a way very different to other cultures, men gather at these gastronomic societies to discuss personal issues and to generally let off steam, meaning that they return home in a more upbeat manner: better for both husbands and wives!

If you are intrigued to visit the Basque Country and want to gain insight into their gastronomic societies and food culture, do not hesitate to get in touch and see what kind of Spanish Gastronomy Tour we can create for you! You might like to include some Basque Michelin starred restaurants, or include a local cooking class, or visit artisan producers of cheese or olive oil, tasting directly on the farm. Whatever type of food tour you are after, we have got it covered for your next customized trip to Spain, Portugal, Italy or France!