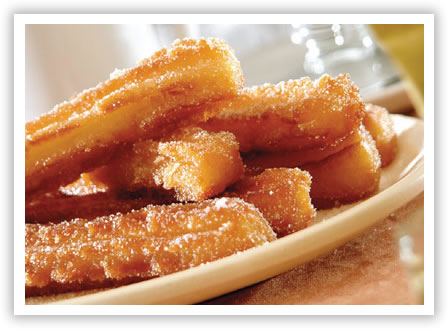 Place the butter and water in a saucepan over low heat.

Cook, stirring occasionally, for 2 minutes or until butter melts and water just comes to the boil. Add flour and stir until well combined and mixture comes away from the sides of the pan.

Transfer the mixture to the bowl of an electric mixer and allow to cool slightly before adding the eggs, one at a time and  beating well between each addition, until mixture is smooth. Spoon into a piping bag fitted with a 1cm star nozzle.

Heat enough oil in a deep frying pan to reach a level of about 4-5cm. (Oil is ready when a cube of bread browns in about 15 seconds.) Pipe 10cm lengths of the dough directly into the hot oil, using a knife to cut lengths;  do not try to do too many at once. Cook for 1 minute each side, then drain on paper towel.

Immediately place the Spanish churros on a tray containing the combined sugar and cinnamon and toss gently to coat. Repeat with remaining dough.

Spanish Churros are historically eaten together with a large glass or mug of thick chocolate drink, into which they are dipped and then speedily popped into the mouth!

There is an ongoing debate as to where you can find the best Spanish churros in Spain! Let us personalize your private Food & Wine Tour around Spain so you can discover this and other such Spanish culinary delights for yourself!