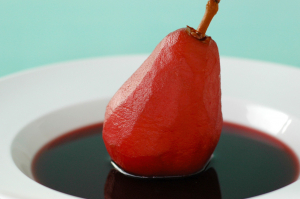 Ingredients for Traditional Spanish Pears in red wine to serve 4

4 big firm Conference pears. Any firm pear variety will be ideal for this recipe

Peel of an unwaxed lemon

How to prepare Traditional Spanish Pears in red wine

Wash the pears as you will use the skin. Peel the pears from the stem to the base, but do not remove the stems.  Reserve the skin.

Put the whole pears flat in a large saucepan together with the skin, the wine, the sugar, the 2 cinnamon sticks, lemon peel and cloves.

Bring the wine to the boil over a medium to low heat and continue cooking the pears uncovered. After about 20 minutes, carefully turn them over.   Suggest you turn them with a couple of wooden spoons so that you don´t break the flesh of the pears.

Continue cooking the pears over medium to low heat for a further 20 minutes and then carefully remove the pears from the liquid and place them in a dish.   Reserve.

Now, continue cooking the red wine with the skins and the cinnamon. Slowly reduce the liquid until all alcohol has evaporated and the consistency of the liquid has thickened.

When the liquid has thickened to a syrup sift the liquid into a large jug.   Return the syrup to the pan, add the pears in an upright position with the stem sticking out of the syrup and cook for five more minutes very carefully so that the syrup does not burn.   From time to time baste the pears with the syrup.

Place your pears upright in a serving dish, pour the red wine syrup over them and either serve immediately warm, or let them cool.   The pears are delicious on their own but a dollop of cream or a large spoon of vanilla ice cream can only add to this flavoursome sweet.

Fancy brushing up on your cooking skills?  Our private Gourmet Food and Wine Tours  introduce you to the best of Spanish cuisine as well as a range of culinary delights such as Michelin starred dining, exquisite wine tastings and authentic gourmet tapas tours.