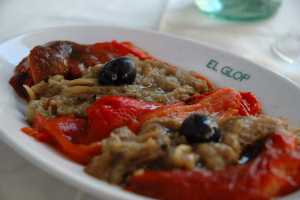 Since the name of this dish comes from the Catalan word escalivar, meaning “to roast over ashes or embers,” it is traditional to cook this over a real flame. If you can’t though, you can bake the traditional Spanish Escalivada in the oven with good results as well.

Unwrap the vegetables. Peel the eggplants, peppers, and tomatoes, and peel away the outer layer of the onions. Split the bell peppers in half, discard the seeds and stems, and cut lengthwise into strips about 1 1/2 inches wide. Transfer to a bowl. Trim the stems from the eggplants and core the tomatoes, and then cut them into strips of the same size as the pepper strips and add to the bowl. Trim the onions, cut into rings, and add to the bowl along with the garlic.

On a Cooking Class Day Tour in Barcelona, our clients frequently prepare this dish as a first course or as an accompaniment to a main course and it always goes down a treat! The day long tour includes a visit to the city’s most talked about marketplace, La Boqueria as well as tastings at all the top ´foodie´spots in the city. 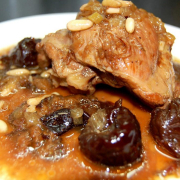