Bring a large pot of water to a boil. Add salt to the boiling water. One by one, add the pasta to the water, cooking until al dente, about 12-14 minutes. Drain the water, and move the pasta to a cheese cloth to cool off. Set aside.

In a large pan, heat the butter on high flame until it melts and becomes foamy. Add the veal and pork and cook on high until it is completely browned. Add the jamon, cooking it until it softens. Drain the fat from the pan. Add the milk, flour and parmesan, combine well. Add the truffles, salt, pepper, nutmeg, combine and bring to a simmer. Cook 10-12 minutes, stirring often. Take the pan off the heat, and let it cool. Stir in the egg.

Once the meat is cool enough to handle, evenly divide the mixture among the pasta. Put the mixture at one end, and roll the pasta up. (If you are using the pasta tubes, simply stuff them with the mixture.) Place the rolls in a 9 inch square baking dish, in a single layer. Cover with the Béchamel, and top with the remaining parmesan cheese. Bake 25 minutes, until bubbling and the cheese is crispy and golden brown.

Heat milk in a medium pan until almost boiling, being careful not to scorch the bottom.
Melt butter in another medium saucepan. Add flour slowly, stirring out any lumps, until it is smooth. Cook until it is a light golden color, about 5-6 minutes. Add the hot milk to the butter pan, very slowly, rapidly whisking until smooth. Add the salt pepper and nutmeg, continuing to whisk until it comes to a boil. Remove from heat.

If you would like to learn to cook traditional and authentic Spanish recipes with a professional Spanish chef, our private Cooking Tours in Northern Spain introduce you to the best of Spanish cuisine as well as a range of culinary delights such as Michelin starred dining, exquisite wine tastings and authentic gourmet tapas tours. 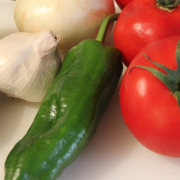