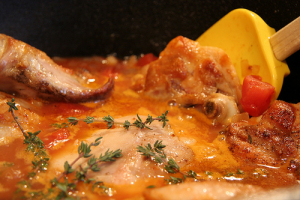 The traditional Spanish Picada is one of the most essential parts of Catalan Cuisine. After grinding herbs, oils, nuts or other ingredients with a wooden pestle inside of a thick yellow and green ceramic mortar, the picada’s mission is to perfectly accent the natural flavors of the fresh produce or seafood it is complementing. As one crushes and releases those aromatic flavors in the mortar, it reminds you of the basic beauty of fresh flavors from fresh products.

On a functional level, the traditional Spanish picada is used to thicken the consistency of juices in particular recipes, like suquet. In addition to being more flavorful than the flour or cream most people use to thicken cooking juices, it is also healthier. Ingredients for the traditional Spanish picada are usually crushed from hardest to softest, then mixed with a little liquid like wine, vinegar, or stock. The mixture is then added to the stew a few minutes before it is ready to add texture and enhance other flavors.

Invented during hard financial times in Catalonia, the traditional picada was used as the most efficient way to make simple dishes taste as spectacular as the food served during prosperous times. Traditional Picada recipes eventually became so delicious and refined that it earned an essential and permanent spot in Catalan cookbooks. Here is one traditional Spanish recipe:

Toast some saffron threads (a pinch) on a non-stick sauce-pan. Then grind it with a pinch of salt in the mortar. Add garlic, almonds and parsley to the mortar and continue to crush into a thick paste. Then add into any recipe (i.e. suquet, peus de porc amb naps, cap i pota) with a stew or juice and enjoy!

You can learn to cook traditional Spanish Picada and other delicious local delicacies with the professionals on our luxury Cooking Tours in Northern Spain  which introduce you to Catalan cuisine and lets you experience the culture of Northern Spain through an unforgettable array of activities.